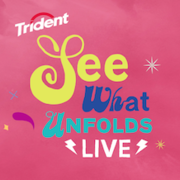 Approximately 3,000 lucky fans were treated to an evening of unexpected surprises thanks to world renowned DJ Steve Aoki, who hosted an unforgettable performance that included an appearance by legendary pop superstars Duran Duran. The defining moment of the night was a Steve Aoki produced remixed performance of the band’s classic hit, Hungry Like The Wolf, aptly named, “Hungry Like The Wolf: Steve Aoki vs. Duran Duran – The New York Werewolf Mix” that brought the house down. See what you think!

“I am always looking for new projects and opportunities that allow me to push my limits and surprise my fans- the chance to remix Hungry Like The Wolf has been a lot of fun and Duran Duran and Tridenthave been great partners,” said DJ Steve Aoki. “Hungry Like The Wolf is such a classic hit, I was thrilled to remix it and now we’re handing it to the fans to bring it to the next level with the video competition. I can’t wait to see how it turns out!” For more information, go to Facebook.com/TridentGum.

With the smashing success of the collaboration between Duran Duran and DJ Steve Aoki, Trident asked what my top three musical collaborations are…or would be!

1. Queen and David Bowie -Under Pressure….You have to love anything that inspired Vanilla Ice….right?
2. Aerosmith and Run DMC- Walk This Way
3. Fall Out Boy featuring Kanye West – This Ain’t A Scene (It’s An Arms Race)

Trident recently launched a new marketing campaign, the tone of which delivers against Trident’s brand purpose of “liberating fun” and is designed to facilitate an emotional bond with consumers. Understanding that a piece of Trident “sparks that fun” is at the core of the campaign’s new messaging. Trident is that tiny spark that motivates you to say yes to life’s fun experiences. Trident wants to hear YOUR thoughts on the greatest musical collaborations of all time, and wants to give one lucky reader a YEAR’S supply of gum! Join in on the conversation, chew Trident, and see what unfolds!!