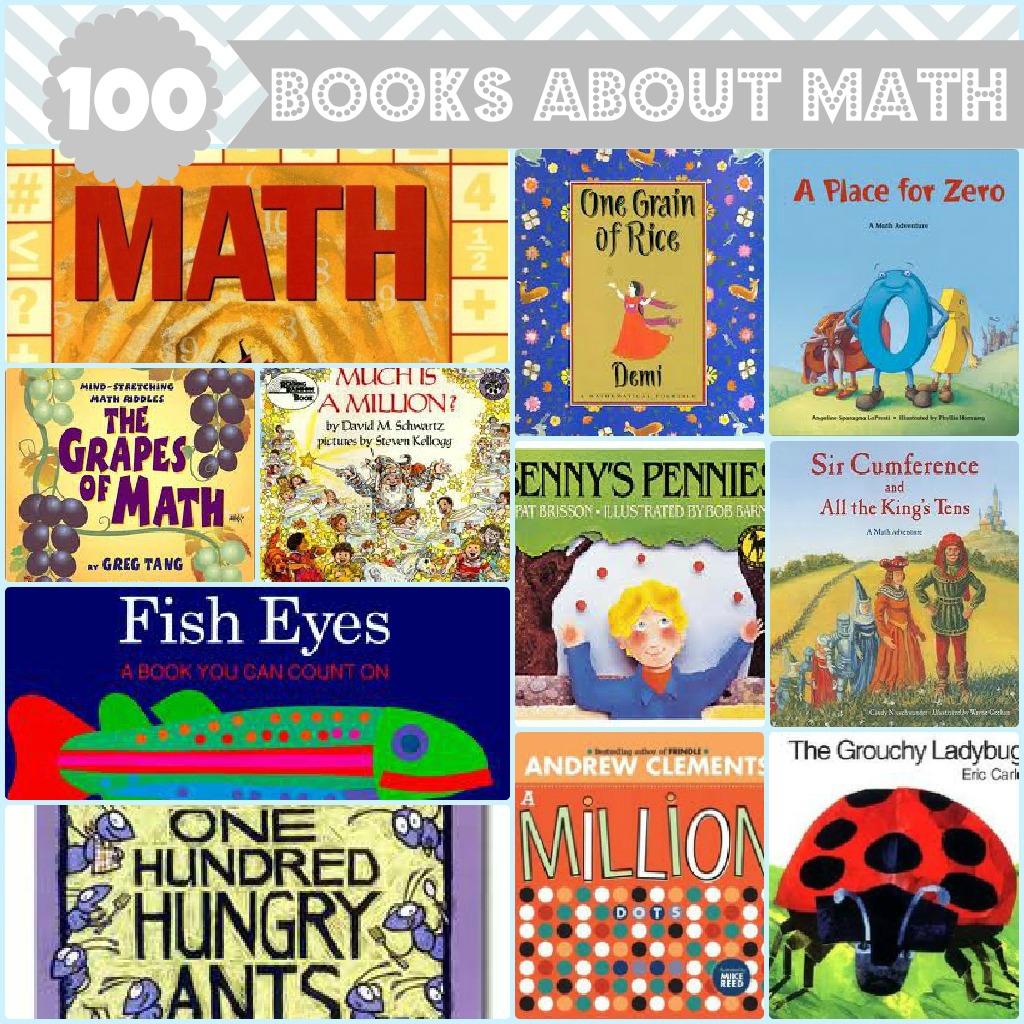 100 Books About Math For Kids

Numbers, shapes, counting, telling time, patterning, addition, subtraction, and so much more! Math is an exciting world of logic, problem-solving, and spatial reasoning. Getting kids EXCITED about math at an early age is critical, and there is no better way than through the magic of reading!

This list is a great mix of both fiction and non-fiction math titles that you and your children can enjoy together. There are books for the very young, and books for middle-schoolers. The bulk of titles on this list are suitable for children K-5. I hope you will enjoy them with your budding mathematician! Even the reluctant math student will enjoy and appreciate these fantastic books about math….and they will learn in the process!

“Arithmetic is where numbers fly like pigeons in and out of your head.”  ~Carl Sandburg

As you read to your children, watch the numbers begin to fly and their understanding of mathematical concepts begin to soar!

6. The Number Devil: A Mathematical Adventure

7. How Much Is a Million? (Reading Rainbow Books (Pb))

12. One Grain Of Rice: A Mathematical Folktale

13. A Place for Zero: A Math Adventure

14. Sir Cumference and All the King’s Tens: A Math Adventure

16. Alexander, Who Used to Be Rich Last Sunday

20. Spaghetti And Meatballs For All! (Scholastic Bookshelf: Math Skills)

On by Lois Ehlert

25. G Is for Googol: A Math Alphabet Book

29. Math for All Seasons: Mind-Stretching Math Riddles by Greg Tang

30. Multiplying Menace: The Revenge of Rumpelstiltskin by Pam Calvert

31. The Wishing Club: A Story About Fractions by Donna Jo Napoli

35. Full House: An Invitation to Fractions by Dayle Ann Dodds

36. Even Steven and Odd Todd by Kathryn Cristaldi

40. Fannie in the Kitchen: The Whole Story from Soup to Nuts of How Fannie Farmer Invented Recipes with Precise Measurements by Deborah Hopkinson

41. How Tall How Short How Faraway by David A. Adler

45. How Many Seeds in a Pumpkin by Margaret McNamara

46. Inchworm and a Half by Elinor J. Pinczes

47. The Berenstain Bears Trouble with Money by Stan and Jan Berenstain

48. All in a Day by Mitsumasa Anno

53. Over in the Meadow by Olive A. Wadsworth

56. A Very Improbable Story: A Math Adventure by Edward Einhorn

57. Mummy Math : An Adventure in Geometry by Cindy Neuschwander

59. The Adventures of Penrose the Mathematical Cat by Theoni Pappas

60. The Dot and the Line: A Romance in Lower Mathematics by Norton Juster

63. Each Orange Had 8 Slices by Paul Giganti

65. A Remainder of One by Elinor J. Pinczes

70. My Half Day by Doris Fisher

71. Two Ways to Count to Ten : A Liberian Folktale by Ruby Dee

76. Lemonade for Sale by Stuart J.Murphy

78. You Can Count on Monsters: The First 100 Numbers and Their Characters by Richard Evan Schwartz

80. Math-terpieces: The Art of Problem Solving by Greg Tang

84. Cut Down to Size at High Noon: A Math Adventure by Scott Sundby

85. One Odd Day by Doris Fisher

86. The King’s Chessboard by David Birch

88. If You Were a Fraction by Speed Shaskan

89. The Best of Times by Greg Tang

91. Beanstalk: The Measure of a Giant (A Math Adventure) by Ann McCallum

92. Once Upon a Dime: A Math Adventure by Nancy Kelly Allen

94. Shapes that Roll by Karen Nagel

98. The Multiplying Menace Divides: A Math Adventure by Pam Calvert

As I was researching and reading for this list, I began to notice a “Varsity Team” of math authors. The following authors are leaders in the field of both fiction and non-fiction math books for children. If you are a parent wishing to quickly scan the shelves at the library for a math book that could enhance your child’s education, look for these names first.

*Pin, share, and pass on this list to anyone you know that may have a child who is struggling with math. Books are a non-threatening and engaging way to build interest and understanding!

100 Chapter Books You MUST Read to Your Kids

100 Picture Books You MUST Read to Your Kids

44 Books About Presidents for Kids