My two year old asks for chicken nuggets just about every day. Much to her dismay, I do not give in to her two year old taste buds. While I have nothing against the occasional usage of nuggets of the frozen or fast-food variety, I’ve always wanted to learn to make great-tasting (and healthier!) homemade nuggets. I found this recipe in my new favorite cookbook, A Year with Six Sisters’ Stuff: 52 Menu Plans, Recipes, and Ideas to Bring Families Together. So far, everything I’ve made has been a winner – and that’s pretty rare. I highly recommend this cookbook.

These nuggets took a bit of effort, but were tasty and a crowd-pleaser. I even got my 8 year old daughter in on the action in the kitchen. The recipe made a TON and everyone enjoyed them….even the four year old, once he got past the fact that they didn’t look like “regular” chicken nuggets. Gotta love picky eaters. =) Try these this week and enjoy! 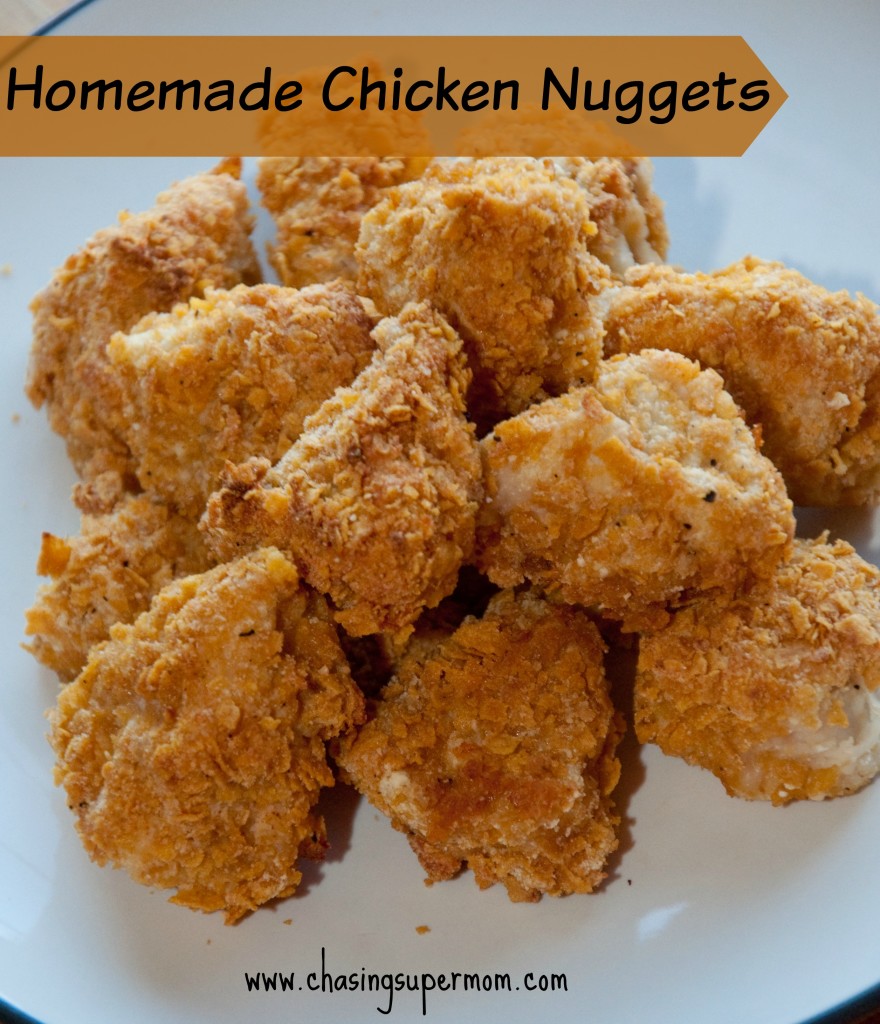 3-4 chicken breasts (I used four and had to whip up more of the breading. Next time, I’ll stick with three large breasts!)

*The original recipe called for 1/4 tsp. onion powder. My husband hates all things onion, so I omitted that.

Preheat your oven to 425 degrees. Spray a cookie sheet with cooking spray.

1. Start by cutting your chicken breasts into nugget-sized chunks.

2. Put your corn flakes into a large Ziploc bag. We had fun using a rolling pin to crunch the cereal up. To the crunched up corn flakes, add salt, pepper, and garlic powder. Dump the mix into a shallow pan.

3. We put the flour into another Ziploc bag. It was faster than using a bowl, and it’s fun to shake!

4. Put the eggs into another bowl and beat them.

5. Shake the chicken chunks in the flour, and shake off the excess.

6. Dip the floured nuggets into the egg.

7. Coat the nuggets with the cereal mix.

8. Lay the nuggets on the cookie sheet. Bake for approximately 15 minutes.