There might be nothing I like more than getting caught up in a good book. I fly through the pages, so eager to get to the next part of the story I can hardly stand it. When I’m reading a fantastic book, everything else disappears. I’m no longer stressed, tired, or worried. I’m transported to another time and place.

About a year ago, one of my best friends from college recommended The Selection series by Kiera Cass to me. Knowing I had “a thing” for YA lit., she had a feeling I would devour the series much like she did. She was right. I was hooked from the very first chapter, and tore through the series as fast as I could get my hands on the books. Imagine my delight when asked a few months ago to help promote The Selection. When the book arrived, I couldn’t wait to dive back in and re-experience the story. (And I was THRILLED to find out a fourth book was coming!!) 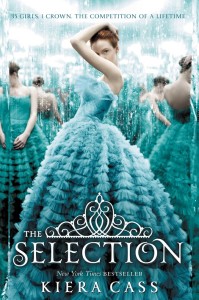 The Selection (as well as the other books in the series, The Elite and The One) are YA meets romance meets dystopian lit. They are the perfect choice for anyone who may find some of the other popular dystopian book/movie franchises too “intense” or violent. They are also terrific if you love the notion of dystopian lit. but aren’t a fan of sci-fi or fantasy. The Selection series is a more romantic alternative for fans of dystopian literature – and a series you can feel okay about your teens reading too! Even I as a grown-up appreciated that the romance elements within the books were kept fairly “PG”, making these books an ideal selection (no pun intended) for a mother/daughter read!

The Selection is “The Bachelor” meets a dystopian world, where the girls are not only fighting for his heart, but a crown as well. The time has come for Prince Maxon to marry. The time-honored tradition of “The Selection” begins, and 35 girls are selected at random, one from each province, for the chance to compete for the prince’s heart. America Singer doesn’t want to enter. She’s in love – and not with Prince Maxon. But in the caste system, her family is only a 5 – and money is tight. When her name is drawn, she can hardly believe it, but she knows one thing – she will not fall in love with Maxon.

America’s plan? Enjoy the food until Maxon kicks her out. She’s certainly not going to throw herself at Maxon or bend to his will. But after a brutally honest conversation with the prince, he tells her, “America, my dear, I do hope you find something in this cage worth fighting for. After allt his, I can only imagine what it would be like to see you actually try.”

Watching the friendship between America and Maxon grow, develop, and change throughout the book (and the series) was a lot of fun. One moment you are rooting for a change of heart and the next you are hoping for things to remain as they are. You will be swept away in their story…..and you may find yourself wanting to throw a drink or two at a few of the other girls…or maybe that was just me. =)

I highly recommend The Selection series by Kiera Cass. Now is the perfect time to discover (or re-read!) the series, as you can binge-read all four books, with The Heir coming out on May 5th!!

Make plans to be busy reading (because you won’t want to put these down!) and check out the entire series! Happy reading!

If you’ve read the books, leave me a comment below, and let me know what you thought!

I was selected for this opportunity as a member of Clever Girls and the content and opinions expressed here are all my own.