Posted by Bekki on May 11, 2015 in Children's Books, Featured, Reviews and Giveaways | 23 comments

*This post is sponsored by Disney-Hyperion. Promotional items and/or samples may have been received to facilitate this post. All opinions are my own.

Gabby Duran is the coolest babysitter in the galaxy. You might even say her skills are “out of this world.” Gabby was a babysitter to the stars – and now her new clients are from another star.

Gabby Duran and the Unsittables is Baby-Sitters Club meets Men in Black in this sweet, funny new middle grade series about a world-renowned tween babysitter who is recruited to take care of extra-terrestrial children. Your own tween is going to love this comedic and entertaining series. I know I would have LOVED this series as a girl, and am excited to introduce my own daughter to these books.

The Association Linking Intergalatics and Earthlings (hereby known as A.L.I.E.N.) has a new member. After months of investigation, Gabby Duran, Associate 4118-25125A, has proven herself to be a babysitter extraordinaire. Her celebrity clients fly her around the country to care for their rambunctious little humans. Our spy, Associate 4118-23432B, otherwise known as Edwina, believes Gabby can be trusted with the truth: aliens are living among humans on Earth. And here at A.L.I.E.N we believe that even extraterrestrials need a babysitter now and then. No one was up to the task…until now. 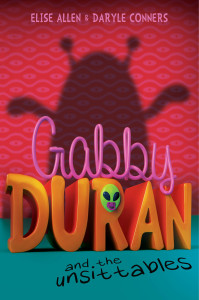 After accepting the top-secret position, Edwina has paired our new associate up with her first charge, a little girl from the planet Flarknartia. The timing for associate 4118-25125A is less than ideal. It’s a school day on Planet Earth, Gabby’s audition for the solo part in the band is tonight, and this tiny alien is a bit more than meets the eye.

Can Gabby Duran, Associate 4118-25125A, First Sitter to the Unsittables, keep her otherworldly charge safe in the unpredictable halls of middle-school and keep A.L.I.E.N hidden?

Sounds fantastic right? I am such a huge fan of books that really grab a kid’s attention. I love storylines and plots that draw young readers in and keep them turning the pages – even past bedtime! If you can hook your tween on a great series – it’s even better! I know your tween is going to love this new series. Let’s learn a little more about the authors:

Emmy-nominated writer and New York Times best-selling author Elise Allen made a name for herself with her acclaimed young adult novel Populazzi (Harcourt), and the Jim Henson’s Enchanted Sisters chapter books (Bloomsbury).   In television, she has written for talent ranging from Bill Cosby to Kermit the Frog, and is currently writing for the new Disney Junior show The Lion Guard.  Her dog may or may not secretly be from another planet.

Daryle Conners is an award-winning writer, filmmaker and video game designer. She writes joke and riddle books and has designed many game titles for the PC and iPhone/iPad including Harry Potter and the Sorcerer’s Stone, Scene It? Harry Potter, Hot Wheels Slot Car Racers, and Scene It? Twilight Saga.  Her non-fiction books include Lunchtime LOLZ, Nintendo DS Hot Tips, ROFLs,Video Game Secrets and Monster High Jokes, all for Scholastic. Daryle lives in Seattle, where she still babysits from time to time.

Learn more at the Official Site 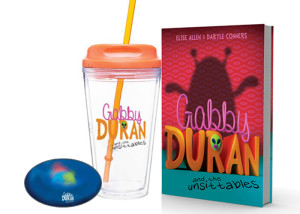 Sounds great right?! Get those entries in! Thanks for entering and good luck!!