Categories Menu
Home » Daily Encouragement » The Power of No

Posted by Bekki on Feb 10, 2018 in Daily Encouragement, Diary of a Supermom, Featured, Uncategorized | 0 comments

The Power of No

It’s a small word – but for so many of us, one we struggle to say.

Will we let someone down? Will they think I’m rude?

What will they think of me if I say no? Will I still be liked? Accepted? Invited again?

Am I going to miss out on something?

We’re so afraid of what will happen when we say no. But – what happens when we constantly find ourselves only saying yes?

Should we always say no? Of course not. There is life to be lived and jobs to be done. But – we need to make sure we’re taking time to evaluate what we’re saying yes to – and the reasons behind our “yeses.”

We have to stop saying “yes” simply because we’re too afraid to say no. Saying no can be completely uncomfortable – but it’s incredibly necessary. That short-term discomfort of saying no is infinitely better than the resentment that can come from saying yes when what you want to do is say no. 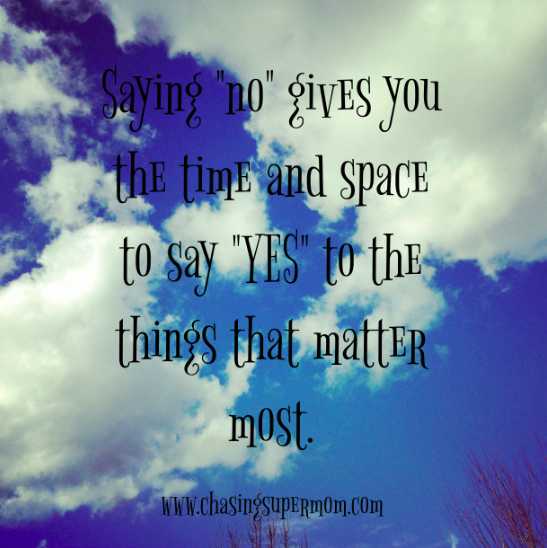 Saying no – gives you the time and space to say YES to the things that truly matter the most. You may be saying no to an event, meeting, task, opportunity, etc – but you’re saying yes to yourself. (And that’s not selfish – it’s healthy!) Saying no is part of establishing boundaries and minimizing stress. When we are constantly saying yes to everything – we end up exhausting ourselves, caught up in the cycle of pleasing and performing. We’re so afraid of saying no to others and so comfortable saying no to ourselves.

I am learning to say no. Our “no” doesn’t need to be lied about or explained away. (A sick child isn’t the only acceptable reason to decline!) It is okay to make room for yourself, your family, and your priorities. It’s okay to live a life that isn’t over-scheduled. It’s okay to have margin. It’s okay to set boundaries.

Learn to say no, so you can more freely say YES to what matters most.