Posted by Bekki on Mar 20, 2018 in Daily Encouragement, Diary of a Supermom, Featured | 0 comments

Living a Life With Freedom From Fear

This week, my youngest daughter lost her third tooth. In most houses, the third tooth isn’t a big deal – but at our house – this tooth was special.

About six months ago, our kids were enjoying a game of tag on our farm. While playing, my wild and free kindergartner tried to climb through an old livestock gate. The gate fell on top of her, and knocked out two of her teeth.

She’s had a wiggly tooth for weeks – and her heart has been filled with fear. She’s been carrying the burden of worry around with her – constantly imagining everything that could go wrong. (Oh how I wish that wasn’t so familiar.)

She’s lived through pain – and she knows bad things can happen. And like the rest of us, she allowed her past experiences to dictate her beliefs about the future.

How many of us are the same way? How many of us are allowing our fear and anxiety to not only shape and color our experiences, but to change who we are? Have we gone from trusting to closed off? From adventurous to anxious? From positive to pessimistic?

It’s so easy to allow the past to dictate our present and future. Because we’ve been wounded by a trusted friend, we no longer let ourselves be vulnerable or become close to people. We started something new that didn’t quite pan out, and now we’re afraid to take any chances. We tell ourselves that our scars are reminders of the pain – reminders to play it safe. But those scars? They’re reminders that you healed….that you made it….that you are so dang strong.

I can’t even count how many times I’ve said the words, “There is no way I can get through this.” Some trials have seemed insurmountable. I was convinced there was no light at the end of my tunnel. I started to use words like “can’t” and then words like “won’t.” I allowed myself to become okay with “safe” – even when “safe” meant STUCK.

Let me tell you a little more about my youngest. Harper is typically a fearless go-getter. She’s adventurous and free, and always ready to try something new. She is so much of who I want to be. So to see her so afraid of something was unsettling. I want for her to keep her open mind and free spirit. I never want her to lose her sense of adventure and wonder. And I want those things for you too.

The thing she was so afraid of was for her benefit. That tooth needed to come out. To leave it in her mouth would have caused a whole host of problems down the road. The things we’re typically afraid of because of our past are usually for our benefit as well.

People hurt us – so we shut people out. An idea we had failed, so we stop dreaming. Someone we loved left us – so we keep people who are close to us at a distance. But things like relationships, friendships, ideas, creativity, love….that’s all for our benefit! It’s part of our needs as a human! But we’re afraid. We tell ourselves it’s easier to live without those things because the pain will be too much to bear.

Now, back to that wiggly tooth. (After some tears and reassurance) I reached into her little mouth, gripped the tooth with a bit of tissue, and gave the smallest of tugs. Out it came. In a flash, it was over and done with. 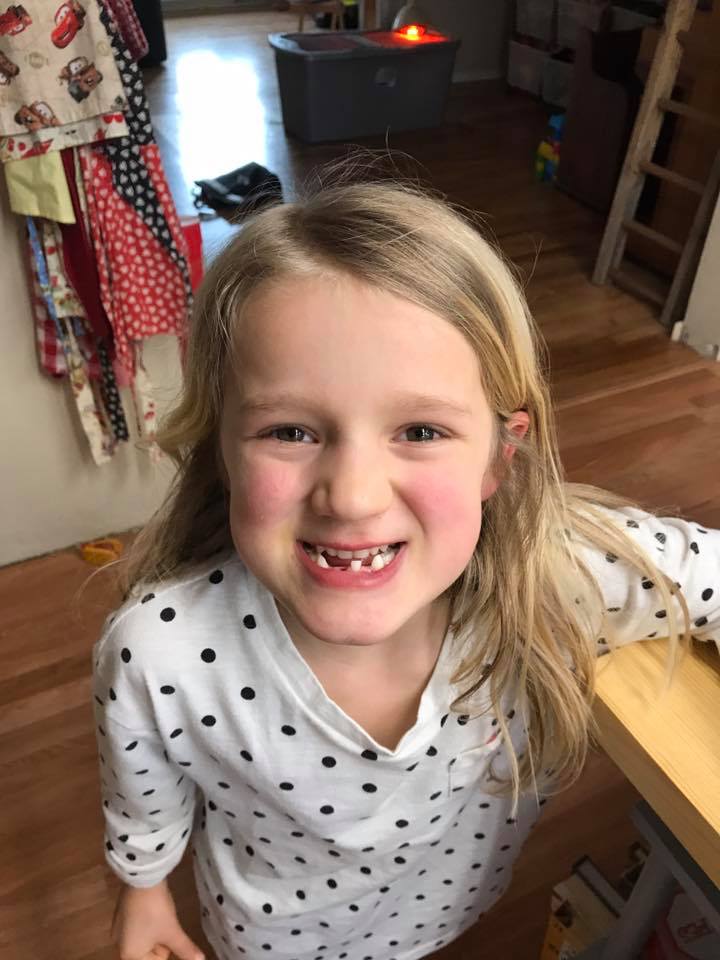 Bottom line? The fear of the thing is usually more painful than the thing itself. Weeks (sometimes months or years) of anxiety, over-analyzing, rationalizing, and negative self-talk convinces us that the thing is just not worth doing. And yes – sometimes we’ll get hurt. We live in an imperfect world surrounded by imperfect people. BUT – we cannot allow ourselves to stop taking risks because of fear.

Being afraid that something won’t work out is not a good enough reason not to try. Don’t let your heart be tamed by fear. Live wild and free – willing to be vulnerable, creative, and authentic. I get it. Those words are scary. But they’re also for your benefit – and make life worth living. So live – freely and without fear.